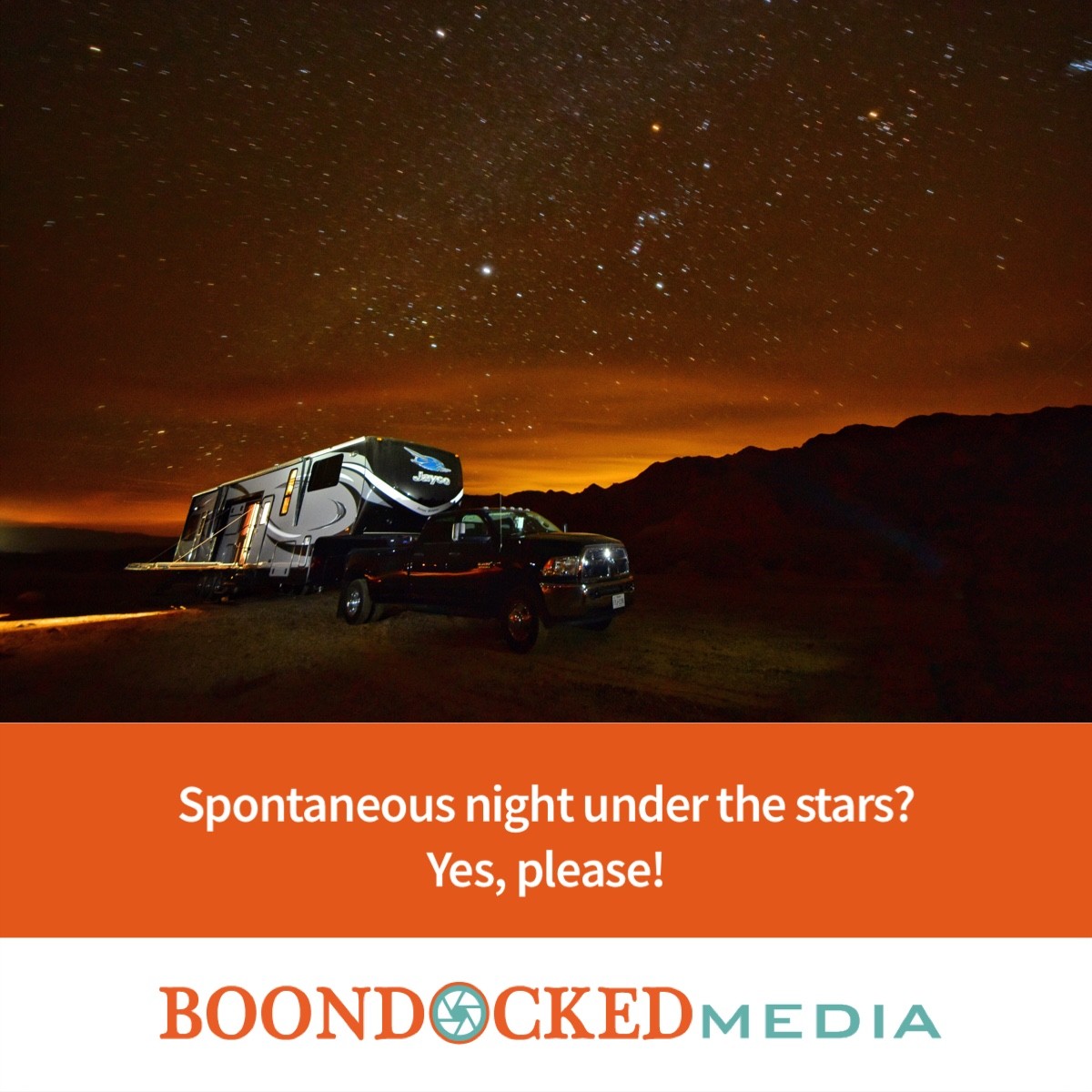 We are living “the dream,” right? We have arrived, right? Yes and no.

How long does this continue?
For as long as we continue to put effort into positive mental health, work, and… saying yes.

Living “the dream” does not just happen on its own. We are still human. We are still somewhat resistant to change, and we definitely thrive on comfortable, familiar places.

Have you ever Skyped with a potential customer at a truck stop on a travel day because you only had only two hours’ notice? Had to quickly pull over, change your clothes, brush your hair, and try your best to look like you didn’t prepare only for a travel day? Done!

Have you ever spent the night in a Walmart parking lot? Twice? Sounds like a “yes” opportunity to me! But what happens when you’re at a crossroad to Wal-docking at the end of the day or blindly turning right down an unknown road when darkness is approaching?

We are big on the road. Almost as big as an 18-wheeler. Turning right or left is never without consequence. Every directional change is well thought out, with known and brainstormed potential unknown variables weighed. Not quite as free-spirited as you might imagine. So what happens when you’re faced with a free-spirited “yes” decision versus a comfortable “no” decision? Why would we say yes when we’re unsure of the positive or negative consequences?

So we pull off the highway and travel down an unknown road as fast as we can, racing against the setting sun. We are in the middle of the Mohave Desert, with the idea of boondocking under some bright stars motivating our determination and willingness to deal with any unknown negative consequences. After seeing one other camper boondocking, we knew we would find our spot soon. We did. We pulled over and settled in for the night.

Here is what boondocking for one night in the middle of no where looks like: 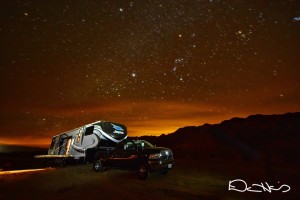 Not too bad, huh? My daughter helped me take that image. She pained the front of the camper with her flashlight and I painted the side. After taking a few images, we were able to compare various exposure lengths with the amount of orange brightness from light noise (which we guess is from LA). I also explained to her that one of the reasons the stars were so bright is because there was no moon. You know… stuff she can use every day in her life, every night, when looking at a night sky… stuff they don’t learn, let alone retain, in a public school.

Our expectations were exceeded before any of us went to sleep! What will the morning hold? Will we have anything to say “yes” to?

Sunrise photo shoot? Sure. Sleep is over rated. Hike up to that unknown structure? Sure. In the big picture, does leaving an hour later make a difference?

As we start hiking up the small mountain, we see proof of movement in the sand that could either be a bicycle or a snake. Given a bicycle’s wheelbase length compared to the numerous curves, it was easy to rule that out. A snake had been in that spot not too long ago, and we could tell he climbed a rock where a bicycle would probably have avoided it. Again, stuff they wouldn’t learn in school.

At the top of the mountain we discover the unknown structure is a deserted mine! The kids were able to get close and personal. We were able to easily compare the differences of a mine (cave-like) versus human dwellings (cave-like) we’ve seen in the recent past. Again, stuff you don’t learn in school.

Those compare and contrast skills will hopefully take them very far in life, always reminding them to think outside of the box and take previous knowledge one step further. Always being willing to say yes, as you never know what that journey will hold.

As you look through the images below, consider if you would honestly say yes to spending the night in the middle of now where, or if fear would lead you to the next town and Wal-docking. Would you stand outside in the cold and wind to take a picture of the stars, or would the unknown noises in the dark be too much to handle? Would you crawl out of bed when you’d rather sleep in the following morning? Would you hike up a mountain just to see what was up there and for no other reason?

We choose to say yes and live out this crazy dream.
We choose to leave a legacy of love and excitement for life through our children.

While we’re at it, we said yes to very expensive diesel later that morning. As we were stopped, I received a call from Seattle. Shout out to Seattle: The Route 66 pics were taken just before, during, and after our call. 🙂

How exciting would this dream be if we said no to all unknown roads?

Are there opportunities and dreams waiting for you to finally answer “yes”?